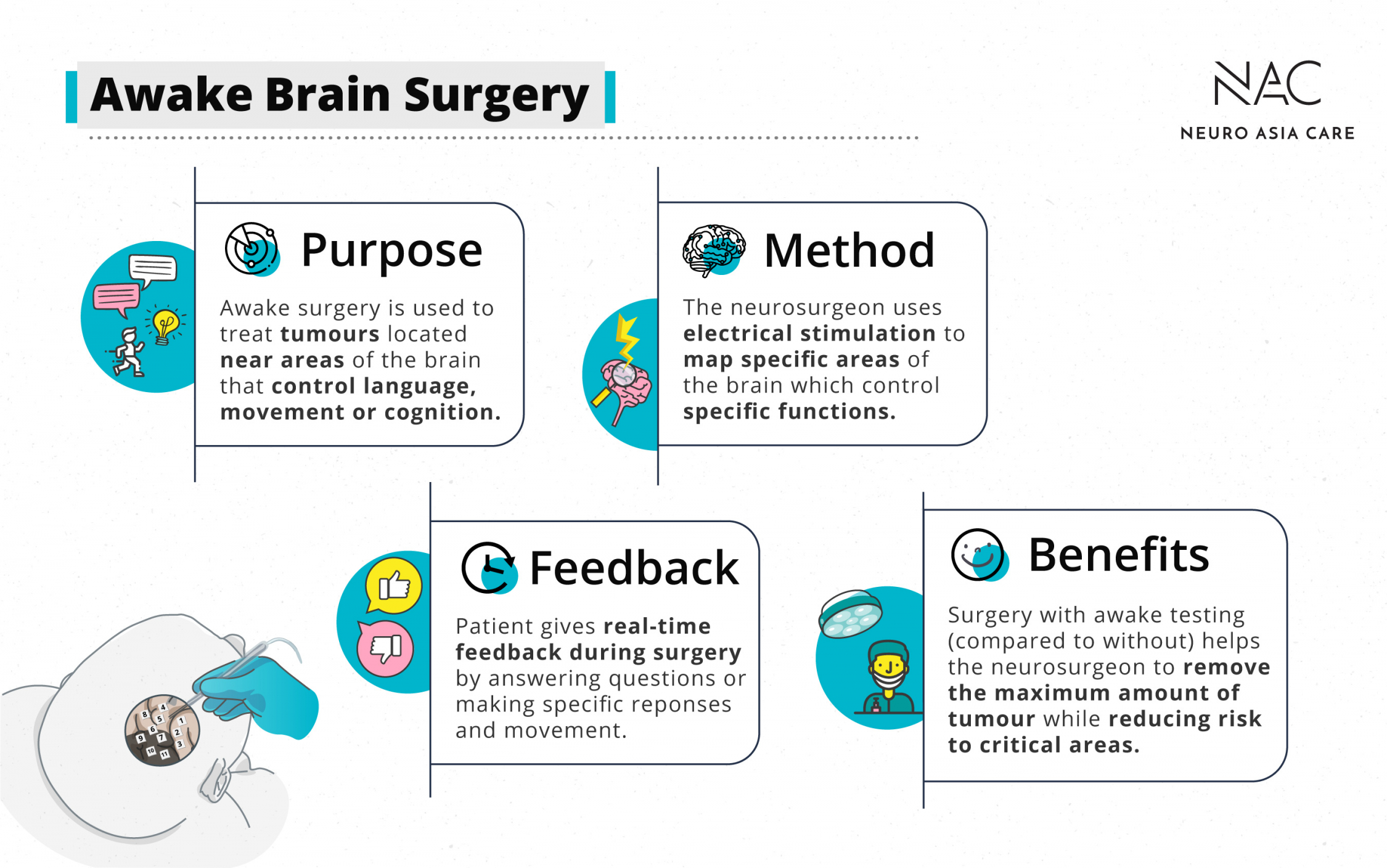 Important facts about awake brain surgery in a nutshell

Imagine being able to talk to your neurosurgeon and giving him immediate feedback while he operates on your brain. That’s exactly what happens during an awake brain tumour surgery.

Why is brain mapping required for my surgery?

While we know generally where speech, vision and movement control centres are found in the brain, no two brains are exactly alike. Brain mapping can identify these regions which are unique to you, and inform your neurosurgeon of which areas in your brain to avoid while he removes as much of the tumour as possible.

Awake brain mapping is typically used for tumours which are very close to areas of the brain that control important functions such as vision, language and movement. Often, these tumours would be considered too high risk to be operated on with conventional surgery with the person asleep and under general anaesthesia.

Awake brain mapping may also be used for tumours which do not have clearly defined borders on MRI scan (making it very hard for neurosurgeons to work out the boundary between tumour and normal tissue).

Won’t it be painful to be operated on while I am kept awake?

No. Awake brain surgery is possible because there are no pain receptors in the brain itself. Your scalp will receive local anaesthesia, so you will not feel any pain during the surgery. Throughout the surgery, the anaesthetist will monitor your status and make sure you feel as comfortable as possible.

Do I have to stay awake during the whole surgery?

What can I expect during awake brain mapping?

During the awake portion of the surgery, your neurosurgeon will use a tiny probe to gently stimulate areas of your brain and see if you can still perform certain functions. For instance, when taking out a tumour that is near the area of the brain that controls your language, you may be asked to complete tasks such as reading or object naming. If the stimulation of an area causes you to make a mistake or stops you from speaking, then that area is labelled as a critical area to avoid. Once the stimulation stops, the function will return. Your neurosurgeon will continue to test the areas intermittently as the surgery progresses to make sure the functions are still intact.

What are the risks of awake brain surgery?

As with any brain surgery, awake brain surgery has its risks and complications, which include the risks of permanent loss of functions, seizures, stroke and infection. The purpose of awake brain mapping is to protect important brain regions and minimise the chances of long-term neurological deficits.

There is a small risk of seizures during surgery that might, in rare circumstances, require conversion to general anaesthetic. However, the brain will be monitored closely throughout the surgery to minimise this risk.

Who can perform awake brain surgery?

Speak to a neurosurgeon who is experienced in performing awake brain surgery.