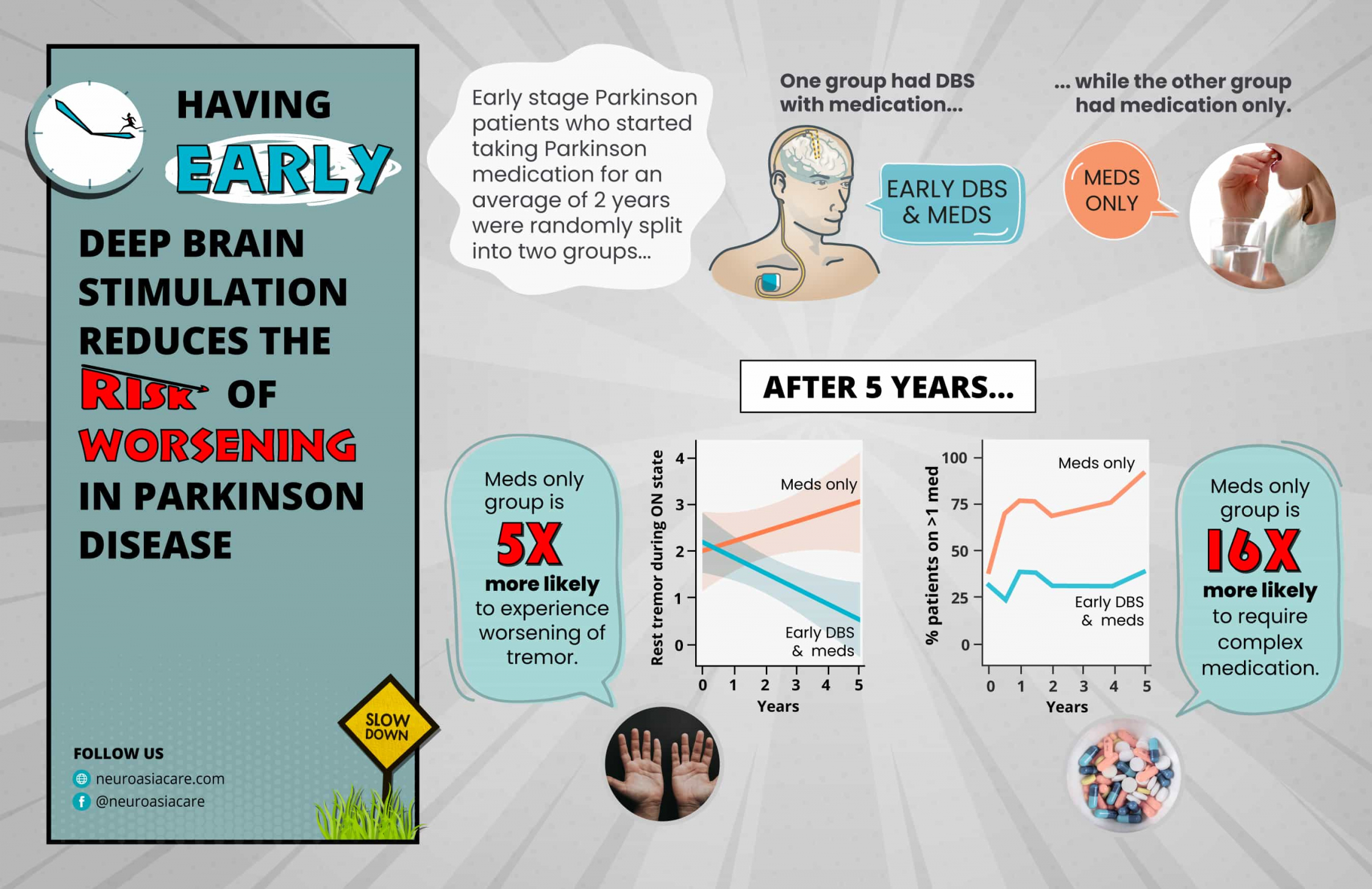 A study published in the scientific journal Neurology in July 2020, showed that early deep brain stimulation (DBS) is safe and has benefit over standard medical therapy. Early DBS may reduce the risk of Parkinson disease progression.

Background on the timing of DBS

Deep brain stimulation (DBS) is an effective surgical treatment and considered as a standard of care in Parkinson disease (PD). Common DBS targets for PD are the subthalamic nucleus (STN) and internal globus pallidus (GPi).

In 2016, there was a shift from longer wait to giving DBS earlier to PD patients at four years after diagnosis, around the time when medication starts to lose its effectiveness and patients start to experience disabling side effects from medication (such as motor fluctuations and dyskinesia).

Will having DBS at an ultra early time point (before medication side effects set in) enhance or extend its known benefits?

Researchers at the Vanderbilt University Medical Centre in Tennessee (USA) conducted a randomised controlled trial to investigate the safety and benefits of early DBS in 30 PD patients.

The patients were randomly selected to receive either STN DBS with medication (early DBS + medication), or standard medical therapy (medication only), and monitored over a period of 5 years.

On average, the patients were between 50 to 75 years old (average age of 61 years) and had been taking PD medications for 6 months to 4 years (average 2 years).

How did early DBS benefit the patients after 5 years?

Compared to patients who had early DBS + medication, those who were on medication only were:

“While one study does not change the clinical practice and treatment of PD, we are excited to see if these results can be replicated on a larger scale in Phase 3 trial for confirmation,” explained Dr Nicolas Kon, a neurosurgeon who performs DBS surgery at Mount Elizabeth Hospital, Singapore.

“Nonetheless, these results are in line with the perspective that DBS is not a “last resort” for PD patients. The aim of DBS is to help the patient preserve function and maintain quality of life, rather than to rescue the patient from a life of disability.”

Early DBS (at 6 months to 4 years) is safe and has benefit over standard medical therapy and may reduce Parkinson disease progression.

More in this category: « The tumour marker that shows which brain cancer patients in Singapore has a better chance of living longer
Top